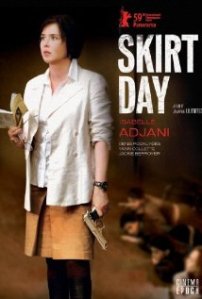 • Both feature French classes – in The Class, a junior-high French grammar and composition course, and in Skirt Day, a high-school French literature course

• Both schools are poorly resourced, situated in “quartiers sensibles” (minority neighborhoods in crisis).

• Both teachers do problematic things to complicate the situation in reaction to their students acting out.

• The students are for the most part either Beur (second-generation) or immigrants from North and Sub-Saharan Africa.

• The students primarily speak in contemporary slang with a liberal dose of vulgarity as a matter of course.

• Both films presume a certain understanding of French Republican values (particularly mixité, the idea that all people should present an anonymous sameness in the public sphere in order to level social difference, and laïcité, or the secular public state).

This, however, is where the similarities end. The Class won the Palme d’Or at Cannes in 2008; Skirt Day, meanwhile, was a made-for-TV melodrama that made a small splash on the screen. The Class stars an actual junior high French teacher (François Bégadeau as the thoughtful and affable M. Marin; Bégadeau wrote the autobiographical novel on which the film was based) and actual students (one of whom, Esmeralda, I had the pleasure of tutoring at the Association de Culture Berbère a few years before the film was made). Skirt Day, meanwhile, stars legendary actress Isabelle Adjani as the trembly and unhinged lit prof Mme. Bergerac. The Class is a quiet and nuanced story; Skirt Day is highly dramatic and polarizing, both violent and sentimental.

I hadn’t seen either film since their theatrical releases in France. So it was striking to see them back-to-back this weekend: I was, as always, bowled over by the subtlety of Cantet’s work (his other films, Time Out and Human Resources, are also quietly powerful, riveting stories, and I recently learned that he is—or has – not sure which—adapted Joyce Carol Oates’ Foxfire for the screen, news that has me downright giddy.) And in the case of Lilienfeld’s film, I found myself shrinking with embarrassment over the absolute lack of nuance and suggestion. Viewers are more or less bludgeoned with the message “don’t judge a book by its cover.”

So as I was putting together viewing guides for my classes, I found myself thinking about how I was going to introduce the films. The Class would be fairly easy. “Show, don’t tell” serves as Cantet’s cinematic mantra, so you don’t need much understanding of contemporary France to get the point that these kids and their families live on the margins of French society, and pedagogical and disciplinary measures that seem obvious in more privileged communities can have far more serious and reaching consequences for these students.

Skirt Day, however, walks an odd line: it simultaneously spells out (through dialogue, costume, and dramatic reactions) exactly why a skirt can be seen as inflammatory in this school’s (and by extension, in the contemporary French) context, and yet presumes lived experience of French society and Republican values (as a tele-film likely would). The major turn in the denouement comes through information that was previously withheld about Adjani’s character. It’s not entirely fair play, and the “telling” is at moments mawkishly heavy-handed.

But for all its flaws, for American students of French language, literature, and culture, I’m thinking that Skirt Day will serve an important purpose. In some ways, the story mirrors the narrative to the French bans on headscarves and veils. It is unsparing in its depiction of sexual violence, one of the major concerns of activists for immigrant women since the rash of gang rapes in the 1990s that took places in suburban French communities following an influx of self-styled imams who professed fundamentalist forms of Islam. The gaps in the narrative that emerge due to the explicit explanations that presume shared knowledge of French society can help students see their own gaps in knowledge.

So I’ve realized that while The Class can be presented as both a work of art and as a cultural document, Skirt Day may, in fact, do more work to help non-native students of French understand some of the stakes – or at least, suggest how much more there is to know—and experience—before we can understand. The idea of who we are inside (back story, family heritage, and the presumed limits of our world and capabilities) vs. who the world sees outside is a driving theme for both films. And delving into the worlds of others: I’ve said this elsewhere, and others have said it better, but this is what the humanities is all about, right?

Foreign language scholars often find that they become someone else in many ways when they are elsewhere, inhabiting another language, another culture. Becoming immersed in a different culture and language is similar to writing fiction in this way: you enter a world and become someone in it so as to understand its order, its logic, its rhythms.

I am about to enter my last month of time at home with Audrey before I return to teaching. So I’ve been soaking in my time at home with her this summer. We’ve spent a fair amount of time in the backyard, tending our marigolds in the garden, swinging in the backyard swing, looking at bugs and butterflies together, and running through the sprinkler together (for Audrey, the first times).

When she’s napping or otherwise occupied, I write.

Fill in your own blanks, but these two things in tandem (spending time with my daughter on the cusp of year two, and immersed in my new novel) has made for some serious beauty this summer.

Two pieces have appeared recently by fellow writer-mothers that led me to put these thoughts together about this summer before I return to full-time teaching. Last week, I read Caitlin O’Neil’s lovely and inspirational essay about writing as the ultimate staycation. And then, a few days ago, Mary Vensel White wrote this astute essay based on Susan Sontag’s claim “if you want to go beyond something that is simply good or promising to the real fulfillment and risk-taking of a big body of work, you have to stay home.”

I was surprised and delighted by these two pieces juxtaposed with one another, as they fill in the gaps in something that’s been crossing my mind of late, that writing fiction is the ultimate escapist activity. It consumes your mind in a way that nothing else does. Even when I’m actually traveling—plane, train, car, in this country or another—I’m still in my skin, my life, my memories, my own awareness. Fiction? If you’re doing it right, you’re not just somewhere else – you’re someone else, too, consumed with their day-to-day, their consciousness, their joys and worries.

But so, too, does being a mother. I’m constantly amazed by the way that I perceive the world now – all of Audrey’s first times. The way the world must look from her vantage point, in terms of her stature, age, and experience. She amazes me.

And so motherhood and writing together? My world is all the more kaleidoscopic, multidimensional. Sometimes I wonder if I will ever need wanderlust again.

What first got me thinking about being somewhere else, someone else while writing was when I was drafting my introduction for an interview I conducted via email with Kazim Ali and Libby Murphy, the two translators of the first English edition of Marguerite Duras’ L’Amour, published this week by Open Letter Books. In my introduction I tried to convey to FWR readers—primarily fiction writers, of course—the experience of translating, and I compared it to inhabiting a character’s skin while that character was writing.

Truly great about the interview with Kazim and Libby was that, in addition to Duras’ mesmerizing text about former lovers’ return to the past, their responses to the interview questions also took me into another place.  Here: the sleepy seaside resort town of Duras’ novel. There: the idyllic gardens and house in Oberlin, Ohio, where the translators did their work. Voici the poet, exalting a literary giant. Et voilà, the careful French scholar, attending to the movement between languages.

So I find the cover of Duras’ L’Amour (are those windows, or doors?) altogether fitting for the book and our interview, not to mention this period in my life. And I am so grateful for these many returns. 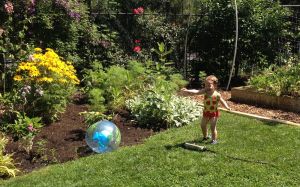 Please enjoy my interview with the translators of the first English edition of Marguerite Duras’ L’Amour, newly published by Open Letter Books. I’ll reflect more on this interview and the book later this week.